The Arrabelle at Vail Square

We try to take a ski trip each year…but we aren’t very successful. The last ski trip we took was in 2013 to Quebec. This year, since I had to be in Denver for work, we decided to spend a long weekend in the Colorado Rockies. After a bit of research we decided on Vail – it was a close drive from Denver and the skiing conditions looked quite promising.

Since I don’t ski I wanted a place in close proximity to non-ski activities, like a full service spa, shopping and restaurants. The places in Vail Village and Lion’s Head fit the bill perfectly, but were quite expensive. We initially decided on staying at the Marriott in Lion’s Head which was going for about $675/night. It was a litttle less expensive than other options, but I wasn’t too keen on the Marriott – nothing specific against it, I just want something a little more unique for that kind of money. I continued to check for price adjustments adjustments to other properties and found the Arrabelle had dropped to be just marginally more than the Marriott, while it is still a ton of money, I figured we’d splurge on this weekend.

We left Denver in our Silvercar Rental around 09h30 and made it to Vail around 11h15. Using the GPS we had no issues finding the hotel, although some friends who came to visit us did have a hard time at night. Come prepared.

We pulled into the porte-cochère and we’re quickly greeted by two bellmen/valets. They asked for the name on the reservation and went to work. They unloaded our car, explained that they will be taking our skis over to the he Ski Valet and we can grab them in about 10 minutes if we were so inclined.

They then explained the complimentary hotel shuttle that will take you around Vail. The shuttle service was offered in an Audi Q7. Basically, you pop down to the valet stand and tell them where you are going and they’ll take you. I used the service four times – each time to/from Vail Village and it worked flawlessly. When you want to return you just give them a ring and tell them where to pick you up. Use of this shuttle was included in your $50 per day Resort Fee.

We proceeded to check in, where we encountered no line, but did find a lovely woman working the front desk who was so warm and welcoming. She greeted us by name (obviously the bell staff let them know we had arrived).  Since it was only 11h15 our room wasn’t ready for check in yet, but they said that the supervisor was doing her final room check to ensure everything was perfect for our stay. She then suggested we pop over to the bar and get drink and she’d call us when the room was ready.

We headed over to the Tavern on the Square and grabbed a beer, split a flatbread and Mike had a burger (I didn’t eat because I had lunch reservations in the Village at 12h45).

By the time we finished our meal, our room was ready and we took the elevator up to the third floor. Our king room was down hall, away from the elevator (woo hoo! I hate the ruckus around the elevators).

While our room wasn’t big, it did the trick for us. We had a great little sitting area near the gas fireplace (that was on the timer). We didn’t spend a lot of time in the room, but we did use this cozy little seating area the most. 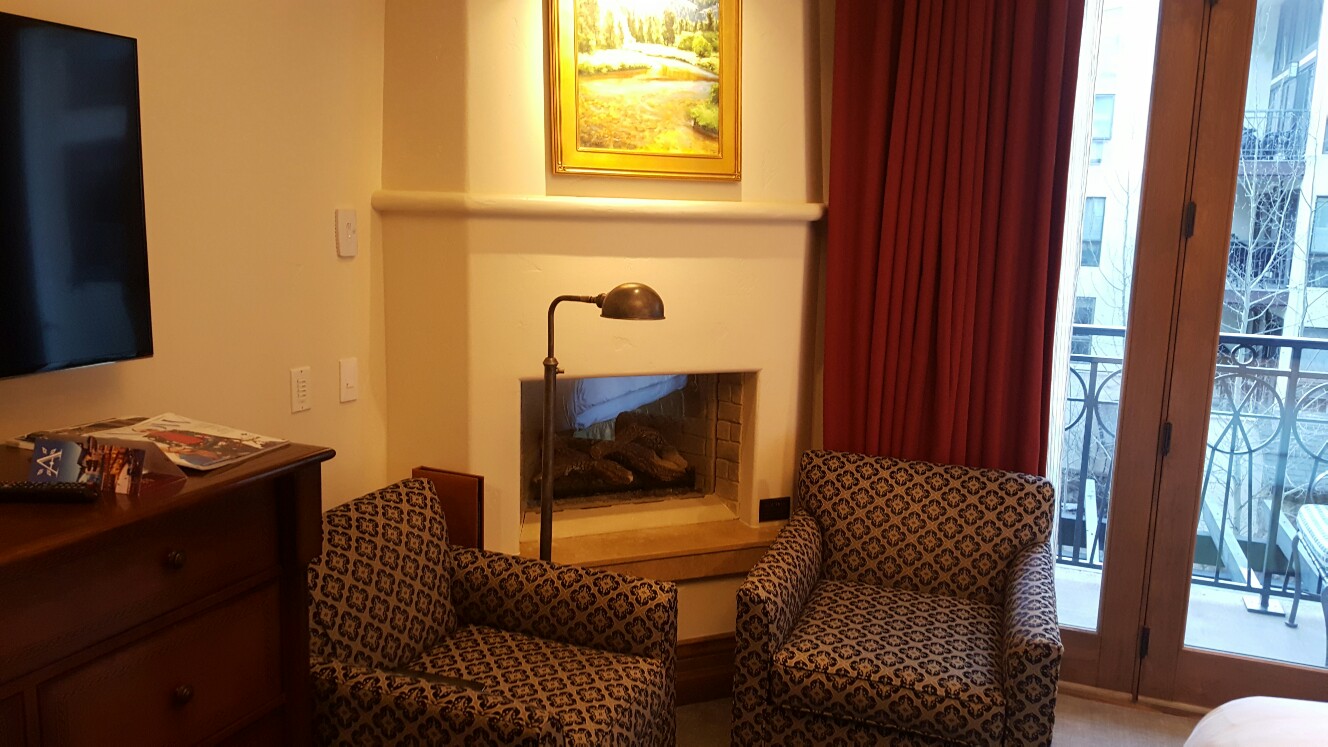 We had a small balcony with two chairs overlooking the pool,  but it was a little too cold to sit al fresco, although if it was a bit warmer, I could easily see us taking a cocktail out there.

The desk served two purposes, a traditional desk and a dining table for two. It is rare you see a two chair setup like this in hotels. It was a nice option for in room dining, but on our short trip, we wanted to be out and about for each meal. 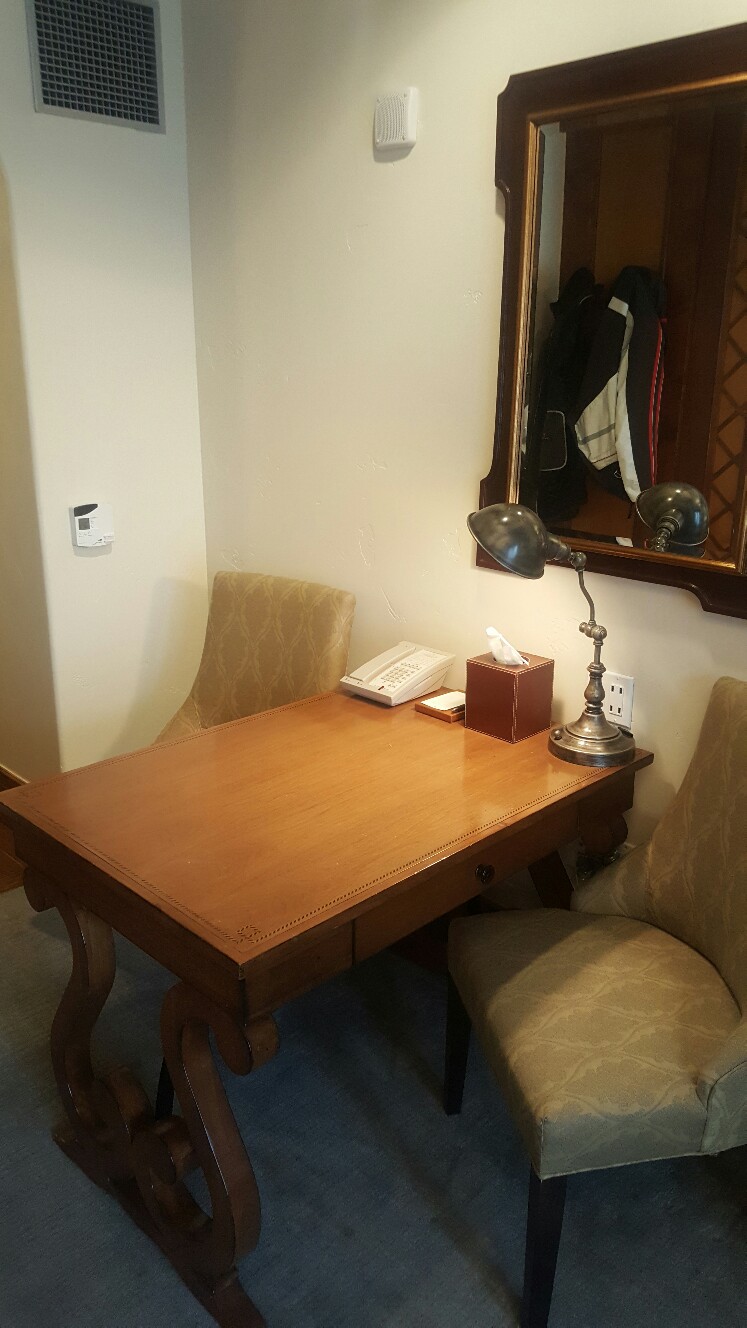 The king bed was very comfortable and seemed wider than our king bed at home, not exactly sure how that works, but it made sleeping easy…so much so that I could have just lounged in bed all day. The duvet was tied at the head end of the bed and the strings and knots kept tickling me throughout the night, which did annoy the hell out of me. 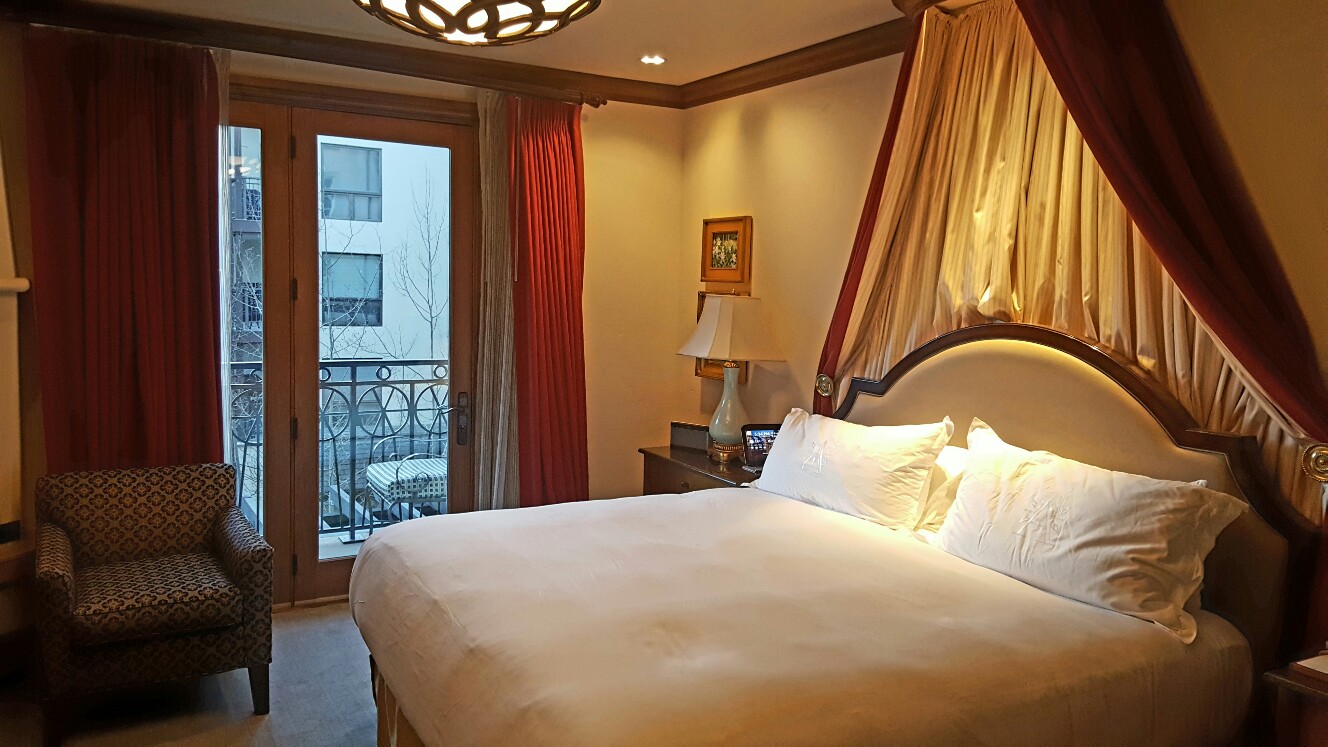 The four piece bathroom was huge and had a separate water closet. The dual sink vanity had ample counter space and was well appointed with Bee Kind toiletries. We didn’t get those tiny single serving shampoos or body washes, both the shower and the separate tub had full sized bottles. 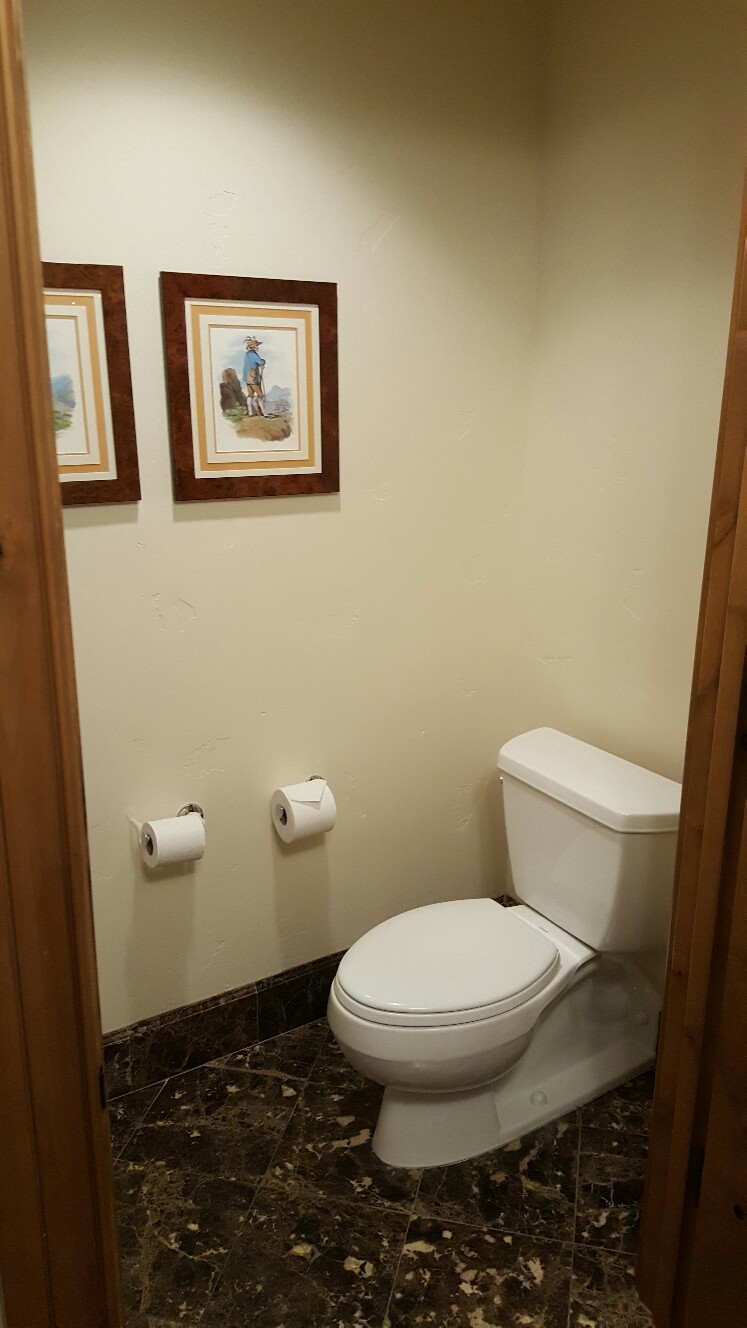 Separate WC. When we checked in only one of the toilet paper rolls was folded to a point…did someone use the toilet after housekeeping serviced the room? 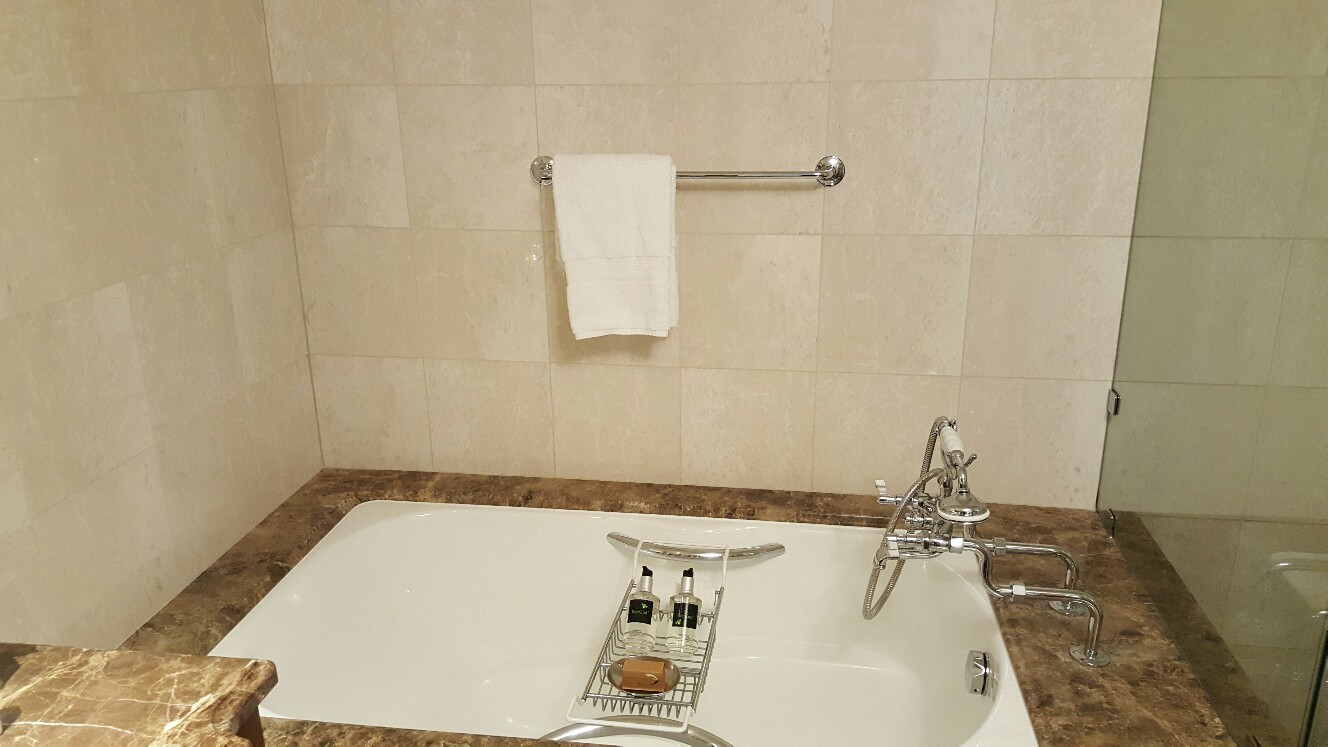 The tub was so deep, I really thought I’d end up taking two hotel baths in a week!

The separate shower was comfortable – not a crowded small space with a low ceiling, but a little dated.  The water pressure and temperature were always  spot on.  One of the things that I was frustrated by during my stay, but realized my issues were unfounded when I was reviewing this photos.  I needed a place to hang my towel while in the shower — I had it laying on the side of the tub, but you can see, clearly there is a hook right where you’d need it.  Can’t see for forest for the trees, some times.

The shower was a little dated, but had nice hot water all day.

The hotel had a $50 per day resort fee.  Usually I find the idea of the resort fees to be just another way to bilk guests…like airlines and all their add-on fees for baggage, seat selection, etc.  Unlike other resorts in which I’ve stayed, this $50 fee included items that aren’t normally a part of the visit, including: valet parking (with in and out privileges), ski valet, complimentary shuttle service in the Audi Q7, limited minibar privileges and the daily breakfast buffet for two.  The breakfast buffet went for $34 per person.  Loyal readers will know that in general, I’m not a buffet guy, unless I’m at a hotel in Asia – they do some amazing breakfast buffets.  I don’t think the buffet at the Arrabelle is worth $34, but as an automatic inclusion in your resort fee, it’s a good addition.  That being said, if I had decided to choose from the a la carte menu, I likely would have ended up spending more than $34.

On Saturday of our visit, I had a massage and spent a couple hours enjoying the sauna and hot tub.  More on that later.

At the end of the day, I don’t ski.  If Mike didn’t ski, we wouldn’t have stayed at the Arrabelle — and we likely wouldn’t have visited Vail in the winter.  That being said, the Arrabelle had everything we needed for a skier and a non-skier.  The location couldn’t be beat.  Visiting Vail Village was the easiest thing around with the complimentary car service.  The ski valet made Mike’s experience that much better (although, he said if it wasn’t included in the resort fee, he wouldn’t have paid extra for it).  The service from the valets to the reception desk to housekeeping were all top notch.  The only hesitation I have with returning to the Arrabelle is the price tag – but the hotels that were cheaper weren’t that much cheaper and I’m positive the service, amenities and property itself would be a huge step down.

When you visit Vail, where do you stay?  Do you choose a ski in/ski out hotel, or do you prefer something a little farther out?  What about après? Where do you go and what’s your favorite way to warm up?  Do you prefer to keep the non-skiers out of your ski vacations, or do you welcome us with open arms?