I love New Orleans. It is one of those cities that I could visit once a quarter just to eat and cocktail (even after this rough visit to the city). The French Quarter alone has enough restaurants to keep you busy for a year, and that’s just one neighborhood. Add in the Warehouse and Garden Districts and Uptown and you’ve got hundreds of great options.

This trip to New Orleans was for work. Early February was a perfect time to visit. It was sunny and 17C (62F) each day. The airfare was less than $150 and the hotels were cheap. I ended up staying at the relatively new Aloft which is situated on Barrone between Poydras and Canal. This hotel opened in March 2015, and is in a perfect location. You can walk to the high rises if you are on business and to the French Quarter and Warehouse Districts if on vacation (or hungry) or hop on the streetcar and head off to the Garden District.

The hotel lobby, bar, pantry and game area are on the first floor while the guest rooms are on floors 11-18.  This hotel is unique in that there are traditional rooms around the exterior of the building (with windows) and interior rooms – I didn’t stay in an interior room, so I don’t know if there was a light well or not, but I do know the interior room was only $3 cheaper. I mentioned hotels were cheap on this trip – I stayed at the Aloft for $81/night. I’ve had cheaper Alofts, but that was in Phoenix in July (and they had strippers/prostitutes in the lobby).

I arrived at the Aloft New Orleans Downtown around 22h10 on Tuesday night and found several hotel staffers hanging out lounging in the check in desk. Once I entered they scattered (kind of like the her a ton in Myrtle Beach). The gentlemen behind the desk was very welcoming and while not the most efficient (we had a lot of time while he clicked around with the mouse – not exactly sure what he was doing).

I was given a king room (with windows) on the 16th floor. One of the things I like about the Aloft brand is that everything is exactly the same. There is no way to mistake what brand you are staying in – interestingly enough, this is also the thing I hate about the Aloft. I like a little variety from time to time.  This room was a little different in layout though. You walked and were face to face with the closet and to your right was the sleeping area and to your left the bathroom.

The sleeping area had a king sized bed, a small desk (much smaller than many Aolfts I’ve stayed), a chair, a partially padded bench and a wall mounted TV. 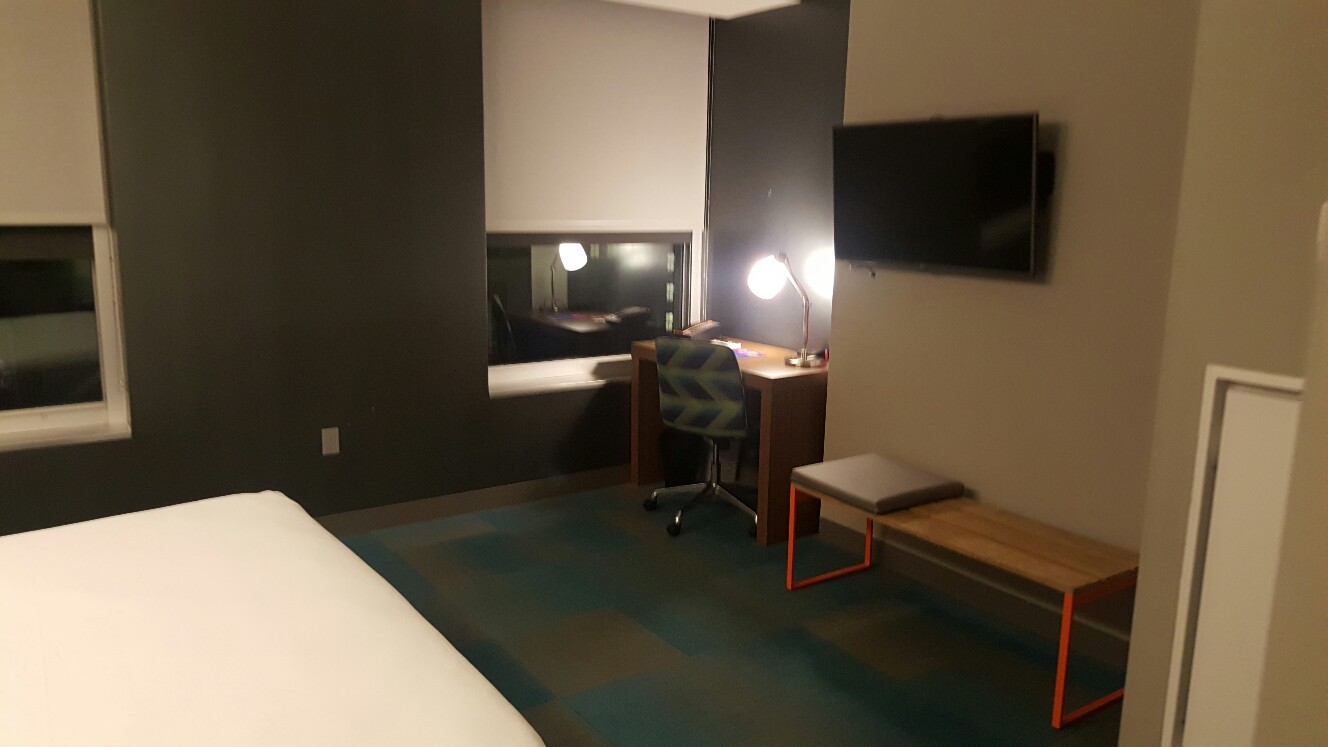 Sleeping Area with a micro desk. 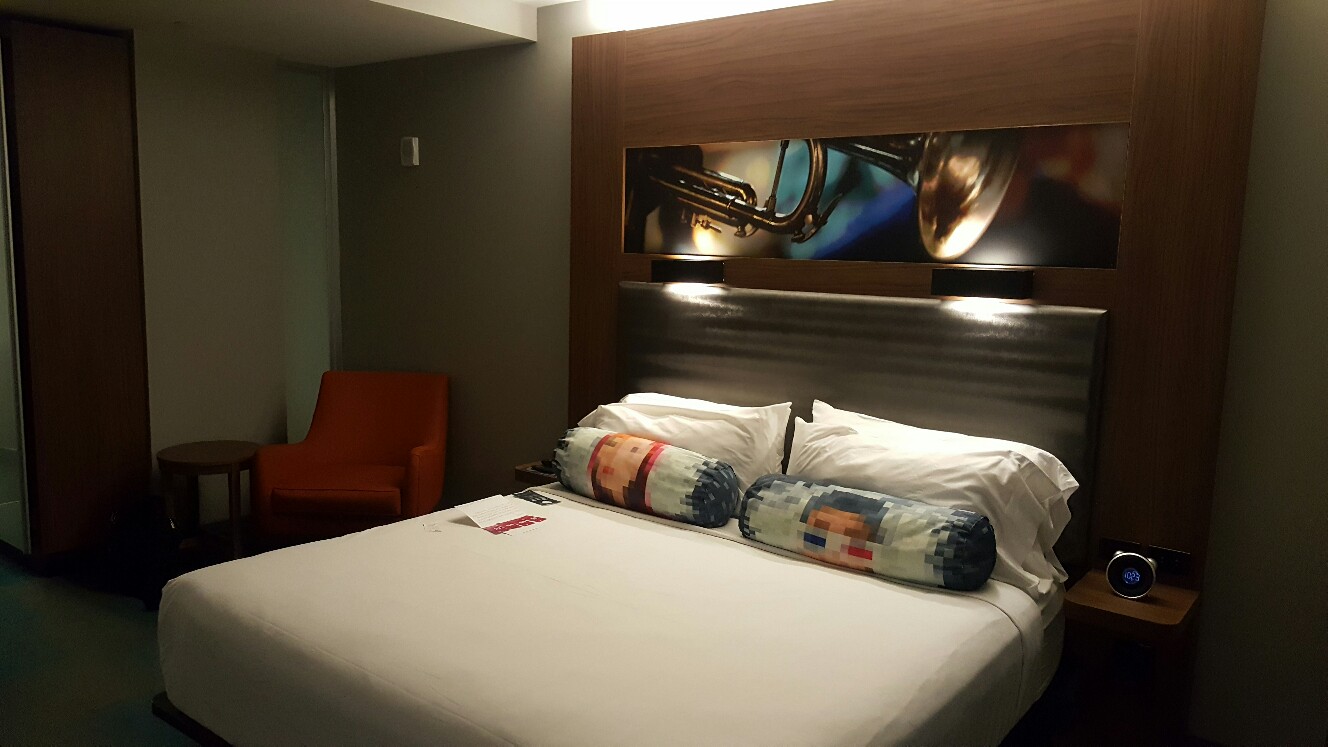 Like all Aloft properties (at least that I’ve stayed) the sink was separated from the toilet and shower, which makes your morning routine easier if you are traveling with someone.  The water temperature and pressure were great my entire visit (morning and night showers were quite hot). I just loathe a lukewarm shower, don’t you? I am not sure if I hate that more than a hot shower that just drizzles out of the shower head. 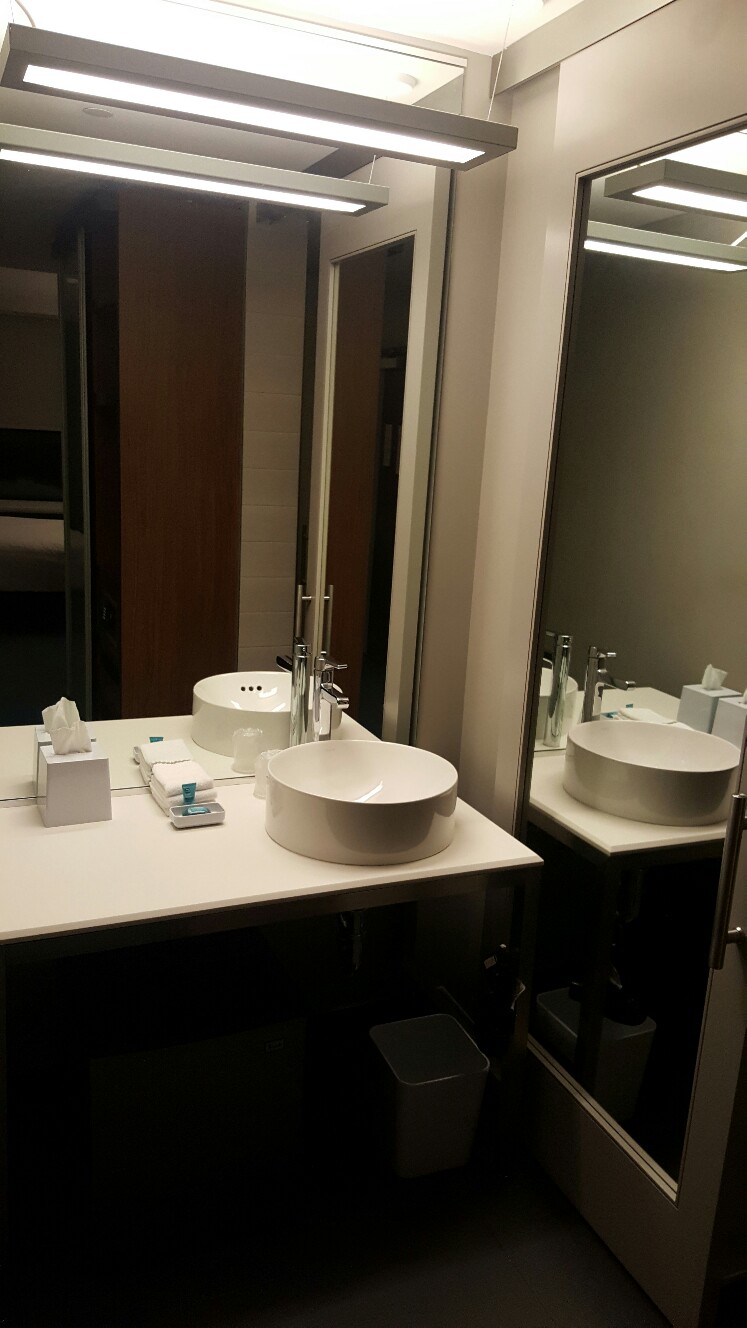 The bathroom had limited counter space.

I hate when you enter a room and find the toilet gaping. It is such an unattractive welcome to the property. Another pet peeve of mine, a low flow toilet. This property had such a strong flush, you may end up losing a small child if you aren’t careful. 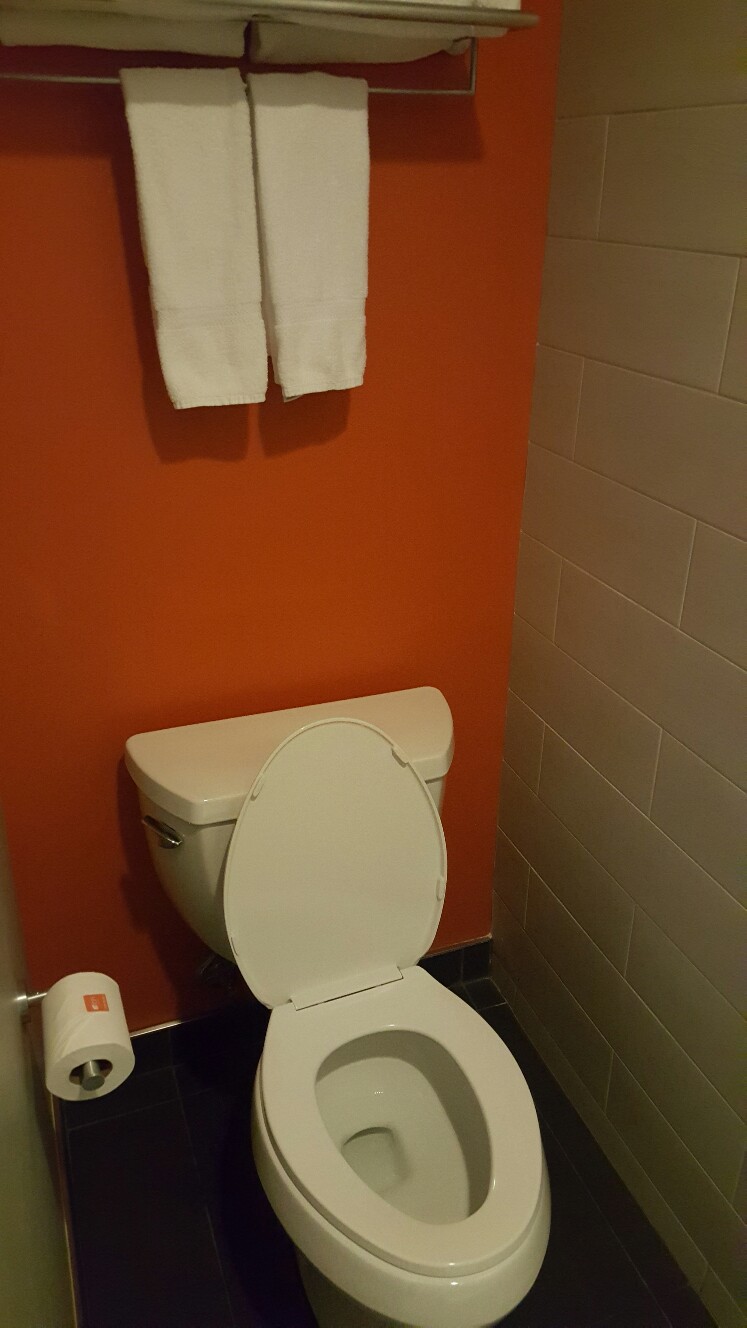 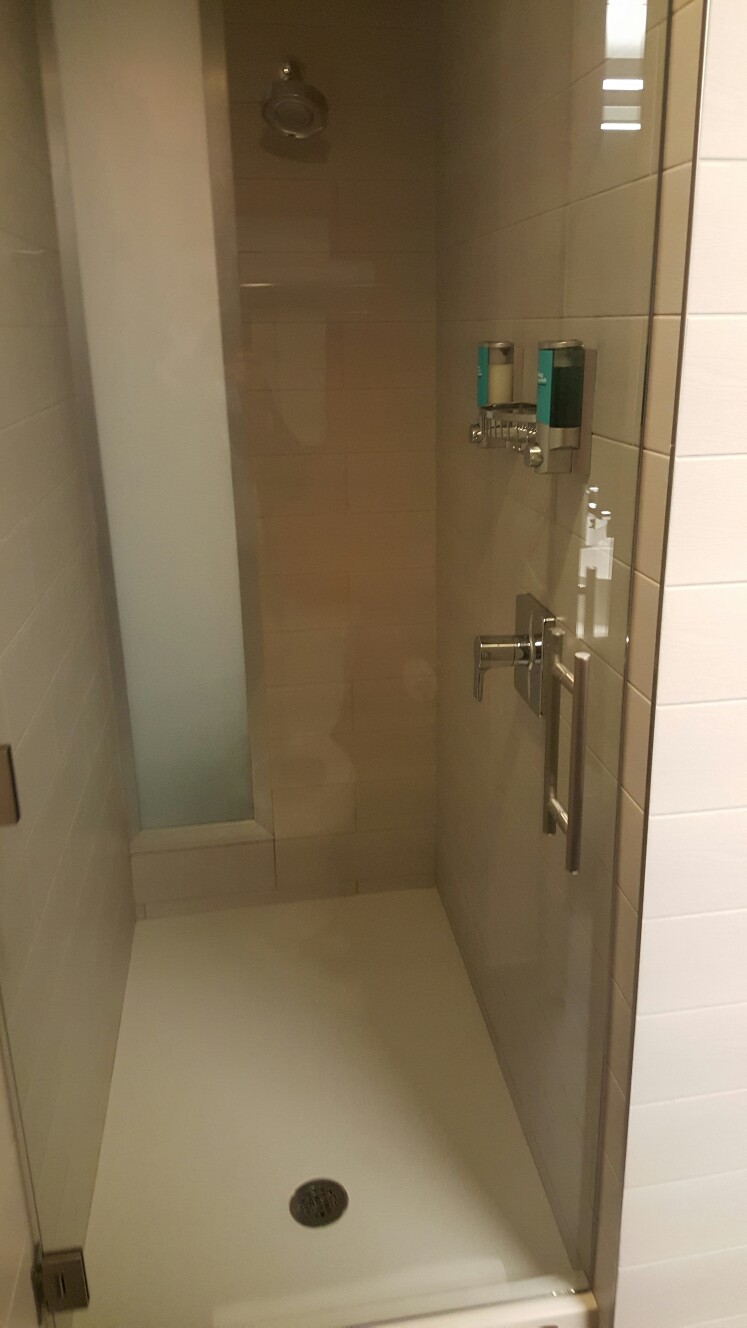 A properly designed shower, with a high head yet not spraying the floors.

My three nights at the Aloft New Orleans Downtown were nice – nothing spectacular. Every interaction (except for the maid) was quick, welcoming and professional. People seemed to actually care and when offering recommendations their heart truly seemed into it.  I mention the interaction with the maid, which was limited, but frustrating. I was finished with meetings and working in my room around 17h00. I answered a knock on the door. The maid asked if I wanted a refresh in the room. I had opted for the Green  Choice where you earn extra points by not having your room made up each day, so I thought it was odd she was there. I said I’d just take a bottle of water, which she wouldn’t give me. She kept pushing the door open, then frustratingly pointing at the towels on the floor. I handed her a towel, and took a bottle of water from her cart, then pushed the door closed. I think it was mostly a language issue, but it was very strange.

I love New Orleans and if the Aloft is as cheap then as it is now, I’d definitely stay here again. The problem with Alofts though, they age very quickly – a combination of the quality of the materials used and the clientele, I suspect.

Have you stayed at the Aloft New Orleans Downtown before? How was the service? Where do you prefer to stay when visiting the Crescent City.